This review is part of a series of the best of the decade. You can read the other entries in the list by clicking this link. This review contains spoilers for Mad Max: Fury Road and I recommend watching before reading this.

I remember extremely vividly going to see Mad Max: Fury Road in cinemas – I was in New York visiting my sister with my dad and my brother. We were having dinner with some friends of my dad when my sister whispered to us that we should leave quickly to see Mad Max, so we perhaps rudely made our excuses and made our exit as soon as possible. I went in almost completely blind and the film left an astounding impact that first time. I remember what the cinema looked like, what I was eating, what trailers came before – but most importantly, every beat, every action scene stuck with me, even five years later. This was almost to the extent that I felt like I could write this without having to re-watch it (I did, of course, re-watch it, because it’s a fucking great film).

Fury Road is a hard one to write about, because so much of the film’s pleasure is experiential. You can’t truly express the benefits of any visual medium through words alone, but Mad Max seems to defy being confined by text more than most. There’s a plot, sure – but it’s extremely basic. Characters move from place A to place B, then back again. Most of the film’s true plot comes from its extremely effective and efficient background world-building. It’s amazing just how much Miller and his designers convey through costumes, set design and the odd throwaway line of dialogue that immediately deepens the viewer’s understanding of the film’s bizarre world. Even the instantly meme-able self-sacrifice of the ‘war boys’ never has to be exposited to the viewer – it happens once in the middle of a fight scene, and you immediately understand what’s going on and why, so that when another character has his whole arc revolve around it, it need never be explained.

The characters are also without much depth. Criticism has been levelled that Max feels like a side character in his own film, with more of the focus going to Charlize Theron’s Imperator Furiosa and the wives of the film’s villain Immortan Joe. In truth, however, Furiosa and Max get about equal billing in terms of importance, but since the film’s underlying themes of getting revenge on the powerful men destroying the world revolves more around Furiosa, it’s her story that the film appears to centre around. However, Max himself undergoes more development within the story, starting as purely survival focused and ending the film able to help Furiosa combat Joe after they fail to find the fabled ‘Green Place’. It’s not a lot for either character, but once again, it’s all delivered with the utmost efficiency.

If the plot and characters are thin, that isn’t to say they don’t work. This isn’t a film that’s strictly about those things – they aren’t inconsequential but they can often feel like a conduit for the film’s high octane action scenes, which take up most of the two hour runtime. These are much harder to write about and I’m lazy, so I won’t try. So instead let’s stop writing about Mad Max and switch focus to something else instead.

No matter your personal feelings about them, it’s impossible to deny the huge influence of the Marvel Cinematic Universe on the decade. Even if you somehow managed to avoid everything from Iron Man to Avengers Endgame, these films will have had an effect on the films you did watch – whether it’s inspiring similar attempts at cinematic universes or helping lesser known directors get funding for their passion projects, the ripples of the MCU will be felt long after it’s gone (that is, if it ever goes). It’s surprising then, that after over ten years of making action films, Marvel really isn’t any good at it.

It’s even more surprising because of the nature of Marvel’s characters. Let’s take the example of a pretty good fight scene from the MCU; the fight between Captain America and Iron Man at the end of Captain America: Civil War. There’s only three characters, the fight is pretty easy to follow, and while the setting isn’t amazing, the pillars in the wall give it some opportunities to be visually interesting. But the fight is basically two people punching and shooting each other – we can see the same thing directed far better in a Bourne film, or a James Bond film, not to mention any sort of martial arts movie. And it leads me to wonder why. These characters are meant to have exceptional abilities, but the films fail time and time again to capitalise on them. 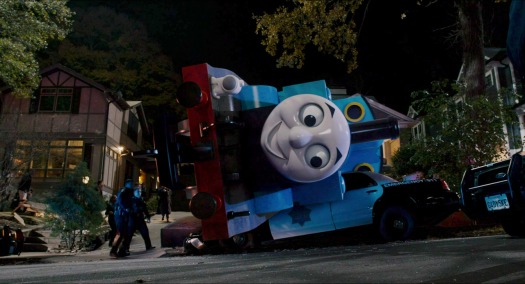 The only really good examples of MCU films using their heroes to their full action movie potential are the two Ant-Man films, Doctor Strange and Spider-Man, but each of those films have a litany of other problems. Of those, only the first Ant-Man (with its inspired Thomas the Tank Engine sequence) and Doctor Strange (with its time manipulation tricks) manage to stick the landing. The most recent Spider-Man film, for example, despite some clever set-pieces in the middle, devolves, like most, into confusing and overly long action sequences that showcase nothing remotely visually enjoyable despite including a villain whose whole point is to make enjoyable visuals.

Compare even the best MCU fight to any single scene in Mad Max: Fury Road and you’ll see why I’m talking about this. To be clear, I don’t have a bone to pick with Marvel films (if I did, I wouldn’t have seen so many), but the way in which Mad Max creates a sci-fi world that so perfectly facilitates action, and then continues to deliver on that action in constantly creative ways and you can see how worlds apart they are. I’ve yet to see anything in any action movie like the tank with drummers and a guy playing a flaming guitar, or the people who swing from car to car on poles, or even the sequence where Furiosa and Max fight while Max remains chained to Nux.

It’s easy to notice the big things that work in Fury Road, like the intense colour changes between night and day, or the thudding score that drives the film forward, but it’s equally important to pay attention to the little things. Take, for example, the way the film zooms in on the face of Immortan Joe to lend him presence, or the way it plays certain shots slightly sped up. Even the way Max reloads a gun in one scene contains around three cuts, but all while focused on the same shot, so as to trim the unnecessary detail while conveying the satisfying process of reloading. Perhaps most important to remember though, is that this whole mad vision was cooked up by someone born in 1945. If that isn’t proof that age is just a number, I don’t know what is.