This review is part of a series of the best of the decade. You can read the other entries in the list by clicking this link. This review contains spoilers for A Serious Man and I recommend watching before reading this.

It’s a new year and indeed a new decade – with this somewhat arbitrary sunrise comes a whole lot of uncertainty about the future. Can we really know what it’s going to look like for us and the world by the end of the next year, or in 2030? Or must we simply accept the inherent uncertainty of life?

A Serious Man, one of the lesser appreciated comedies from the Coen brothers, attempts to look at this question. I think I could have chosen any of the Coen’s films to go on a list of the best of the decade, and indeed many people have highlighted Inside Llewyn Davies as their top spot (they might also be more averse to blurring the line as to what constitutes a film of the decade). But for my money, it’s A Serious Man that best encapsulates the themes of the Coen’s films, films which focus on the horrible randomness and unfairness of life, whether in the Wild West or suburban Minnesota.

A Serious Man opens with a seemingly unrelated short film about the arrival of a Dybbuk into the house of a Jewish couple in the 1800s. Although signs point to the wife being correct in her suspicions about the visitor, the short ends without ever confirming whether the man was indeed a spirit or not. Some critics, such as Roger Ebert or David Denby have linked the opening to the main body of the film by suggesting that perhaps the Dybbuk is the cause of Larry Gopnik’s troubles. The Coens have denied that idea, but it’s an interesting one to think about, especially in how much the film links itself to Jewish beliefs. 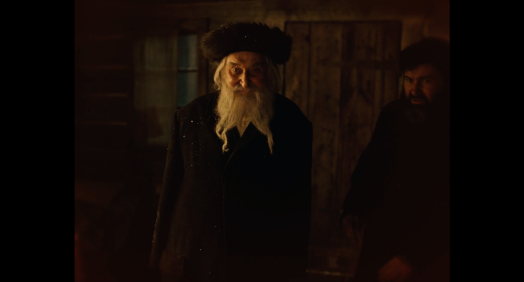 However, I think it’s also slightly missing the bigger idea of how the Dybbuk story ties into the themes of A Serious Man. Larry explains this himself when you see him teaching his first class. He’s talking about Schrodinger’s cat to his class, and later has to re-explain the idea to a failing Korean student. Larry says that the cat itself isn’t the point – the cat is the story you tell to help you understand the maths. Later, Rabbi Nachter tells Larry the story of the ‘goy’s teeth’. Both that and the Dybbuk story seem meaningless to the viewer (and indeed the characters) at first glance, but like the story of the cat in the box they’re a lens through which to understand the story of Larry from.

As mentioned, the story of the Dybbuk and the teeth are both stories about the mysteries inherent in life. Larry, a physics professor who understands life through provable formulas, has a hard time doing what Mr. Park tells him to do and accepting the mystery. It’s for this reason that he doesn’t think Rabbi Nachter’s story wasn’t helpful – it’s a story without an ending or a point, but that is itself the point of the story. Larry, and the audience, want to know why the Hebrew was inscribed on the man’s teeth, or whether the man in the prologue was a Dybbuk. But it’s not important – the mystery itself is intriguing, but we have to accept that sometimes we can’t know the answers. Whether it’s God, fate, or simply the screenwriters, those in control of the story don’t owe us the answers – just as in life, we must accept the presence of the unexplainable or the unknowable (It’s maybe because of this that this film becomes a useful touchstone for anyone who claims that films with unsatisfying endings are annoying).

Larry’s struggle with accepting this is made even worse because all the unknowable things that happen to him seem to be a series of torturous events. His wife leaves him for a patronising, faux-sympathetic man named Sy Ableman (brilliantly played by Fred Melamed), who Larry sees as his rival, not only in love, but in everything. It’s Sy who ends up being the one trying to sabotage his attempt to get tenure at his university, and Sy who in Larry’s nightmare claims that he understands the things in life that cannot be understood. But even Sy isn’t free from the grip of the unpredictable, as he dies in a car accident that happens simultaneously to Larry. Both men are unable to do anything in the hands of fate. A similar tragedy befalls Larry’s brother Arthur. Despite spending his life working on a probability map of the universe that works for card games, he’s unable to predict his eventual arrest.

Larry’s ongoing torture, however, seems to make the film a reflection of the Job tale. It’s tempting to call any story where bad things continuously happen to someone a ‘Job’ story (is Curb Your Enthusiasm a retelling of the Book of Job?), but A Serious Man is so otherwise focused on religion and the religious experience that it makes a bit more sense here. Like Job, Larry is a man who has done very little to deserve the string of failures that come his way. Unlike Job, Larry does question the will of God; maybe that’s why he’s not rewarded at the end of the story. It’s maybe worth noting at this point that I’m not religious, nor do I come from a religious background and so I tend to think of A Serious Man as a film that shares a sort of atheistic viewpoint on God, where no matter how much Larry tries to reach ‘Hashem’ (here represented by Rabbi Marshak), he can’t quite get there. However, you could also view this film through a religious lens. Like Scorsese’s Silence, A Serious Man may well be a reflection on the persistence of religious belief despite persecution.

Above all the thematic probing and questioning of life and its mysteries, what really makes A Serious Man so fantastic is just how well-made and funny it is. It’s a Coen Brothers film, so how could it not be, right? But in a way, it’s still surprising how much is made out of such a seemingly mundane setting and story. You could see how even less talented filmmakers might squeeze some comedy out of a setting like the Hollywood of Hail, Caesar or the characters of The Big Lebowski. But A Serious Man manages to have the comedy of those films while being about some guy living in suburbia who, in his own words, doesn’t really do anything. 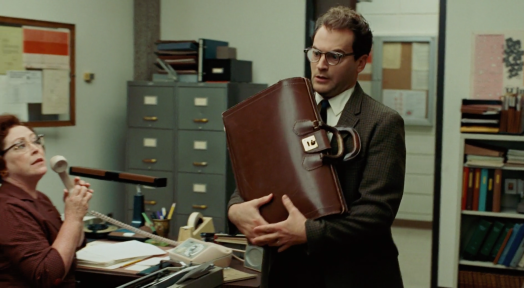 A lot of this is due to the actors, certainly. I’ve already mentioned Fred Melamed as Sy, whose hulking presence takes up the screen in a magnetic way –  see the way he takes up the screen when he first enters, and how he moves Larry around and presses him up against the wall so naturally. Michael Stuhlbarg is also fantastic – he embodies Larry with perfect timid energy, even to the way he clutches his bag in front of him like a shield as his life starts to collapse. You can read his feelings like a book; that rising anger and desperation at being unable to understand his own situation simply unable to manifest itself in such a nervous man. The other members of his family, from his demanding wife Judith to his… demanding brother Arthur constantly take advantage of his inability to say no.

As always in Coen films, the side characters are perfect companions to the main cast, with each feeling like their own films would be just as interesting as Larry’s. Special shout-outs to Rabbi Scott and his obsession with the parking lot and its relation to God, as well as Don Milgram, Larry’s kindly but expensive divorce lawyer (who has probably some of the best facial expressions in the film’s funniest scene when the property lawyer has a heart attack in front of Don and Larry).

A Serious Man, taking place in the world and time period that the Coens grew up in, is probably their most personal film. I don’t know where they picked up their fascination with the mystery of life, but this is their most, and perhaps cinema’s most, thorough examination of the subject, and one of the best films of the decade.