This review is part of a series of the best of the decade. You can read the other entries in the list by clicking this link. This review contains full spoilers for The Killing of a Sacred Deer and I recommend watching before reading this.

Unless deliberately trying to trick you (a la Audition), films will generally inform you of their tone far before they inform you of their premise. The premise of The Killing of a Sacred Deer, Yorgos Lanthimos’ surreal retelling of the Iphigenia myth, is only actually explained about an hour into the film. Steven, a heart surgeon who lives a relatively nuclear lifestyle with his wife and two kids, has befriended the son, Martin, of a patient who he killed during surgery. Martin’s strange and unnerving mannerisms are at first a sign there might be something more to him than meets the eye, but this is only revealed once Steven’s son Bob falls ill. At the hospital cafeteria, Martin reveals his true intentions. One by one, Steven’s family will die of a supernatural illness. The only way he can stop this is by killing one of them himself, with his own two hands. This is, by and large, the premise of the film.

The premise may bring to mind a kind of psychological thriller, and much about the film serves to reinforce that genre designation, but on reading the tone from the film’s opening scenes, it seems to be far more of a comedy than a simple plot description might let on. The first conversation we hear, between Steven and his friend Matthew, is strange and stilted like all the film’s conversations, but it’s also pretty funny. Sure, it’s not funny in a traditional way, but the tone of voice and dialogue choices make The Killing of a Sacred Deer steer close to something akin to a Tim and Eric skit. It’s unsettling, absurdist humour, for sure, but it is comedy.

Reading the film as comedy can also help in understanding and decoding it. The Killing of a Sacred Deer, unlike some of Lanthimos’ other films such as Dogtooth or The Lobster, doesn’t have as clear a message on the human condition or inter-personal relationships. It’s almost easy to simply read the film as a kind of cinematic extrapolation of one of those ‘would you rather’ questions (perhaps one of the reasons I like it so much, being myself one of the annoying people who tends to ask those kinds of things). Would you rather kill one family member yourself to save them all? Which one would you kill? Steven’s attempts to answer that question are nearly all darkly comedic. While his wife takes the utilitarian approach of saying they can always have more children, Steven goes to ask a teacher which child he thinks is ‘better’. His ultimate solution, which we’ll come back to, is to sit them in a circle and spin around with a hunting rifle until he manages to hit one of them.

So, if I’m saying The Killing of a Sacred Deer is nothing more than a comic ‘would you rather’, then why not pick one of Lanthimos’ “deeper” films to write about? Well, the comedy does actually hint towards the film’s other intention as a satire. The story on which the film is based is an old Greek legend. Agamemnon, on his way to Troy, kills one of the Goddess Artemis’ sacred deer, and in order to appease her, she orders him to sacrifice one of his own – his daughter Iphigenia. The story is one of kings and goddesses, but Lanthimos moves it to an unspecified American city, with some well-off but ultimately unimportant characters as the leads. In doing so, Lanthimos pokes at the banality of the middle and upper classes. Going back to that first conversation, it’s all about watches and watch straps. The daughter coldly asks her brother if she can have his “MP3 Player” when he dies. Milestones in someone’s life, like their first period, are spoken of plainly and without much emotion or passion behind it. Even the sex between Steven and his wife is devoid of emotion – he gets off on her pretending to be unconscious. While Greek tragedies of gods and kings work on arch, high emotions, The Killing of a Sacred Deer strips all that away – these people have no emotion in their lives at all – even when it’s shaken up by the supernatural their outbursts are few and far between. Taken as a comparative work, Lanthimos’ condemnation of the upper classes is that they’ve simply lost all emotional ability.

One thing that the two stories do have in common is that the main decisions makers are real wet blankets. Agamemnon starts the tale deciding to kill his daughter, then changes his mind, then changes it back again. Steven, meanwhile, spends the entire film without making a decision, instead just subjecting his children to tests that he knows will be fruitless. In the end, all he manages to do is come up with the worst possible solution, a game of chance where he often doesn’t even hit anyone. While the other characters in the film are often coded through stereotypes and archetypes, Steven feels the most fully fleshed out in his pathetic display of cowardice. Despite being someone who is in his job completely in control over someone’s life, the moment that veneer of control is taken away from him he completely collapses. Steven, like Agamemnon, is revealed to be nothing more than a person who finds themselves completely unable to control their situation. The mask of manhood is pulled off and the sad truth is revealed. 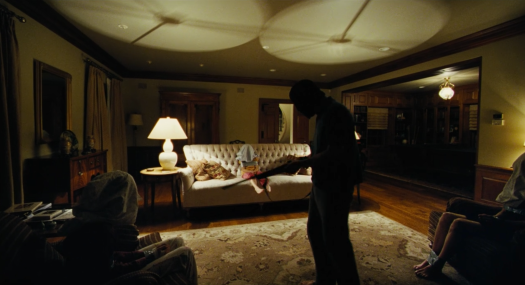 Categorising the film as nothing but comedy may seem a bit obtuse, however. The Killing of a Sacred Deer is also a horror film, and it puts all of its camera work and sound design into achieving that goal. The thundering soundtrack is sparse, but well employed. Of particular note are scenes where both soundtrack and diegetic noise are cut out completely, not to increase the impact of dramatic scenes but simply to throw the audience off from where they might expect a score or sounds.

Equally good at throwing off the audience is Thimios Bakatakis’ cinematography, which shows a mastery of using empty space. The film is populated with the wide shots favoured as a distancing technique by Lanthimos, but even when in close-up the space left in the frame feels unnatural. The characters are never quite properly positioned in the screen – there’s little symmetry and no golden ratios to be found. This isn’t to say the film isn’t beautiful – it absolutely is, but it’s not traditionally so, and the choices made are often done so in order to wordlessly heighten the film’s tension and surreal nature. And the film is tense, often extremely so. But it doesn’t really achieve this through the comedic dialogue or performances, which means most of it has to be done through cinematic language.

Although The Killing of a Sacred Deer doesn’t initially seem as complex, it’s outward dark humour and simple but sharp social satire elevates it to my favourite of Lanthimos’ films.