This review contains some spoilers for the fifth season of Arrested Development. I recommend watching the show before reading.

I think I should probably clarify upfront that I’m not really as harsh on the fourth season of Arrested Development as many seem to be. Not that it’s anywhere near the heights of the first three, but I found the way it worked around its restraints admirable, even if it created something that neglected the family dynamic that the series is best known for. What I think I liked most about Season Four, however, was how it positioned itself as Arrested Development as made for a streaming platform. In the past, Arrested Development has had overarching series narratives, but mainly attempted to wrap up smaller stories within the confines of one episode. However, with the show now able to be binged in a matter of a day, it makes more sense for Arrested Development to build its trademark twisting narratives over a longer stretch.

Arrested Development Season Five is by most accounts better than Season Four, but it makes some decisions that run counter to how Arrested Development is currently presented. One of the biggest is having to start from the admitted mess that Season Four left the series in. Season Five eventually moves past most of the more questionable plot-threads left dangling by Season Four, but not before they slow the season down considerably with long narrator recaps of previous episodes. Ron Howard again plays dual role as bad actor and good narrator, but here his role telling the story is beefed up considerably. You can see this as continuing from “Season Four Fateful Consequences”, where the remixed way the story was told meant Ron had to present five minute recaps of the story so far at the start of each 20 minute episode. It’s just as exhausting here as it was there, although at least now Howard begins to disappear as the series finds its rhythm, rather than getting more intrusive.

Speaking of the season finding its rhythm, Netflix has confusingly started to split up its comedy shows into two half-seasons, presumably in order to reduce their bingeability, or to drum up twice the hype, or maybe there’s some complicated business decision that shows most people watch Netflix comedies in two halves over the period of a couple of months. A move like this works for a show like Unbreakable Kimmy Schmidt, which is reasonably exhausting to binge, what with its commitment to a machine-gun barrage of jokes as opposed to having its plot make much sense. But Arrested Development has a very different structure to Kimmy Schmidt. It has retained its complex overarching narrative from Season Four, but now that narrative has been split in half by Netflix. The season has somewhat of a ‘mid-season finale’ in the form of the 2nd July Parade, but that Parade doesn’t wrap up most of the Season’s ongoing plot-points. Some of them get satisfying answers, but most are left in a half-way state. It seems like the decision to split the season was made halfway through production, because I doubt the commitment to an ongoing narrative would have been made had the team known about the split.

The split also affects the quality of the jokes in Season Five. Arrested Development‘s jokes are built through complex repetition. Each new joke has to be introduced a number of times before it becomes a classic by being exposed to new contexts. That’s not to say the show’s jokes aren’t funny the first time, but more a testament as to how it can turn a simple catchphrase like ‘I’ve made a huge mistake’ into something special. Season Five can still pull out jokes from its old bag of tricks, but the split makes establishing new ones much more difficult, and if I’m being honest, I find it difficult to remember most of the new running gags Season Five attempts to establish.

Some of the jokes that do work still aren’t perfect(o). Take, for example, a pretty genius gag from the season “finale” in which, during the parade, the Milford Academy marching band plays in true Milford fashion. It’s one of the funniest jokes in the episode, and would be something only worth mentioning as a positive, did it not run for about 30 seconds, after the point has really been made after about 10. I’ve really harped on about this before, but I think it’s worth saying anyway. The reason most comedies should stay 20 minutes is because it forces a high density of quick, fast jokes. Jokes don’t get worn out, because there isn’t the time, and jokes that don’t deserve to be in there get cut, because there are better jokes that need the time. Arrested Development Season Five tries to stay more towards the 20 minute mark than Season Four, which can only be a positive, but it still lets its Netflix freedom get the better of it, with the season finale being a whopping 35 minutes long. 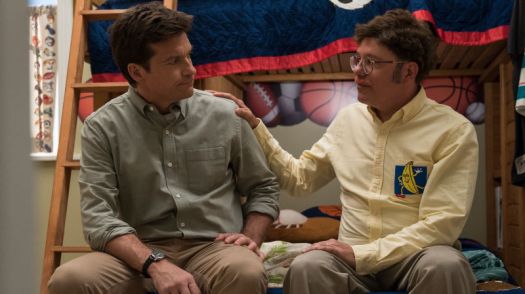 I think I’ve been quite negative about the season so far, so let’s rectify that a bit, because it’s still enjoyable enough. The real highlights of the season comes from two characters; Maeby and Tobias. Maeby’s turn as Lucille II’s fake pensioner sister is everything Arrested Development should be; it’s a funny premise that allows for the show to mix in weirdly dark humour (Stan Sitwell’s advances on Maeby), an exploration of messed up family dynamics (Maeby feeling Sitwell could provide the paternal figure she’s missed all her life) as well as still allowing Maeby to fuel the Bluth family plotting through her semi-serious advice to George-Michael.

Meanwhile, as Maeby attempts to move away from the family, Tobias tries desperately to fit in, despite gaining new family of his own in the form of his son/stage-partner as played by a nervous Kyle Mooney. Tobias’ need to fit into his adopted family while completely neglecting his own wife and children is a ripe vein for comedy, especially as he tries to get his own son into the acting (or at least clowning) game, completely oblivious to the reality that there’s more to life than being famous.

Arrested Development Season Five has some real highlights, and I’m tentatively glad it was made, as long as the second half of the season carries this momentum into its second half. But its necessity is still questionable, and the split does nothing to help its case. The cast is still funny, and watching the Bluth family plot against each other to little avail is always enjoyable. But one can’t escape the feeling that Arrested Development should have been allowed to end on a high, or at least that it should have kept the format that allowed its ‘Rube Goldberg machine of comedy’ style to thrive.