In the 1950s, the prospering Japanese film industry reinvented the “monster movie.” The giant monsters of the era were “kaiju” that often symbolized the effects of pollution, such as radiation and hydrogen bomb experiments.
In the 1960s and 70s, the “hero show” was born. Brave heroes challenged the kaiju on prime time television, and the entire nation tuned in.
The heroes were just as big as the monstrous kaiju, but they were more like friends to the children of Japan, or even a father that would protect them, no matter the sacrifices he had to make…
– This text appears each time you start up Attack of the Friday Monsters

I first heard about Level-5’s Guild series through Official Nintendo Magazine, an old UK-based Nintendo publication that I subscribed to before it sadly shut down in 2014. The Guild series consisted of two 3DS games published by Level-5 that were a collection of small games made by different famous game directors. Although sold in a bundle in Japan, in the West, these games were released without the “Guild” tagline on the eShop. At first, the only game of this collection I bought was Attack of the Friday Monsters: A Tokyo Tale. This is because of a certain phrase from the ONM review that stuck out to me; that the game made the reviewer ‘nostalgic for someone else’s childhood’. Although I’ve long since lost my copy of that magazine and the website has been shut down for some time, that phrase and this game have occupied a part of my mind for quite a while now. And while I talked about this game in my list of my favourite 3DS games, I’ve wanted to expand not only on why I consider Friday Monsters such a treasure, but on the Guild series as a whole, and why it was such a worthwhile experiment.

Attack of the Friday Monsters centres around a young boy named Sohta, who has recently moved to Fuji no Hana, a fictional small suburb of Tokyo. Every Friday, giant monsters supposedly fight in the fields near the town, and as such, the children are warned from wandering too far afield. As Sohta, you investigate the truth behind the monster attacks, as well as find out more about the other inhabitants of Fuji no Hana.

Gameplay as a whole is pretty simple, and mainly consists of running from objective marker to objective marker talking to people. Occasionally (and I really do mean occasionally, it’s only necessary at two points in the story), you have to play a card game against your friends. The game is called “Monster Cards”, and it’s a clever take on the rock-paper-scissors game — serving as a decent distraction from the main plot, and something to keep you coming back once the story is over. The catch is that the way you collect cards for playing Monster Cards is by finding “glims” scattered on the ground around Fuji no Hana. Collect 5 of the same type of glim and you get a Monster Card. At the start of the game, you are asked to run around collecting at least 20 glims, assuming you never pick up more than 5 of the same type. This could be excused as a way to familiarise players with the map, but given its small size and detailed map on the touchscreen, it comes across as tedious padding.

When the game starts, a small musical cut scene plays that near perfectly encapsulates much of what I love about Attack of the Friday Monsters. I’ve linked the opening scene above for you to see, but there are a few things in it I really want to highlight.

The first is the fact that there’s an opening scene at all, sung from the perspective of Sohta. Sohta is obsessed with the hero shows of early 1970s Japan, and often sees his life as mirroring one. That a day in his life has an opening theme tune, or that each of the tasks you have to complete in the game are referred to as ‘episodes’ is just a lovely bit of theming.

It’s also a bit of theming that ties into the main idea of the game; the confusing nature of childhood. In the lyrics of the opening song, Sohta mentions that “Both my Mom and Dad love me, I don’t really know why, what should I do?” This uncertainty of life as a child is present throughout the game. It’s not just in Sohta or any other characters’ relationships with their parents, it bleeds into everything, including the plot.

The main hook of the game is found in seeing whether or not the monsters really do come out on Friday. As a viewer, you see many clues telling you they don’t, such as a TV station that seems to be responsible for the evidence that might prove the existence of said monsters. But Sohta consistently fails to put two and two together. Even when he and his friends come close — such as realising the monster footprints have been dug by people, and finding that a sign believed to be in an alien language was just made by the father of one of Sohta’s friends — the kids still never doubt the existence of the monsters or aliens. It’s a lovely bit of childhood wonder, and by the end of the game the viewer is sucked into it as well, as events occur that seem unexplainable through ‘adult’ logic, and we are asked to simply accept them. Although the game starts by maintaining a relative distance between the player and the child characters by offering the the former rational explanations for what the children see as fantastical, by the end it has eased us into their perspective and asks us to suspend our disbelief as well. For me, it works perfectly.

This dramatic irony is also used in the child characters’ dialogue for the game’s lightly comedic moments. There’s nothing in this game that comes close to laugh-out-loud funny, but it’s meant to be gently amusing, and it mostly nails that feel. The dialogue for the children is pretty spot-on, although when the game attempts weightier dramatic moments, it occasionally veers too close to melodrama for comfort. Take, for example, the game’s bully character. He isn’t in the game for too long, but whenever he is, his storyline falls much too in-line with every bully stereotype, including Sohta literally asking him “You’re just lonely, aren’t you?” It’s a rare and disappointing step into stock tropes in a game that otherwise defies them in its strange storyline. The argument could be made that the childrens’ often stock personalities are calling back to the hero shows that the game is constantly referencing, but it manages to defy expectations in its adult characters and central plotline, so I don’t see why it can’t for the younger members of the cast. 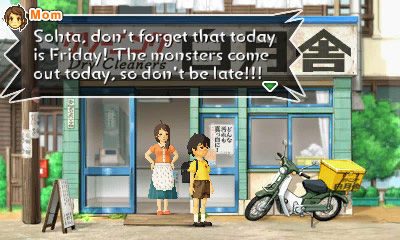 The lot you have to explore is small and doesn’t change much or open up a lot during the game, but it’s quietly beautiful. All the backgrounds are hand-drawn, with the 3D character models placed on top of them; an effect that works surprisingly well, even if it’s a shame that the 3DS’ image quality sometimes stops this from looking as good as it could be. It also means that each screen on the game has a fixed camera angle à la Resident Evil, although it works better in this game given the slow moving nature of the gameplay.

Attack of the Friday Monsters makes use of its status as a videogame even outside of Monster Cards. Although much of what I’ve described of Friday Monsters’ strengths could come forth in a book or film, games as a whole are more immersive, and there’s something to be said for small atmospheric details — such as the radios playing in shops, or the train announcements that get quieter as you move away from the train station — that can only have the effect they have in a video game form. Additionally, even though the story is highly structured, the small moments of freedom that come from deciding in which order to complete optional episodes, or even which route to take to a point on the map all contribute to sucking you in to this act of tourism in someone else’s memories.

Attack of the Friday Monsters was created by Kaz Ayabe (born in 1965), who is best known otherwise for creating the Japan-only series Boku no Natusyasumi (lit. My Summer Holiday). These games have a similar gentle, holiday feel to them, but they are more open life-sims. Attack of the Friday Monsters is a much stranger game, and a much more personal game. For someone like me, this exemplifies the strengths of the Guild series. It gave creators a chance to make extremely personal projects with a big budget, not ever having to worry about anything except how to best bring to life their vision. Boku no Natusyasumi has 4 games in its series, whereas there will likely and hopefully never be an Attack of the Saturday Monsters. But therein lies its charm – Ayabe was allowed to make a game about the strange inconsistencies and confusing nature of childhood, all the while bringing the player into a slice of Japan that can no longer be experienced. It does indeed make me nostalgic for someone else’s childhood.