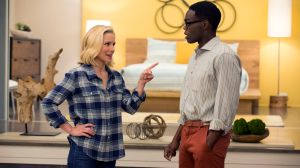 It’s very rare that a sitcom actually manages to improve so considerably on a second viewing – that re-watching really makes that big a difference. But The Good Place is a rather unique show, and as such demands a re-watch, and for fans to really reconsider the groundworks the series is based on. It’s for that reason that I cannot suggest reading this review without first having completed series one of The Good Place, because the spoilers here will be much more impactful to watching the show than for any other sitcom I think I’ve ever seen.

I think that really speaks to the scale and uniqueness that Mike Schur is aiming for in this show. Previously known for workplace sitcoms like Brooklyn Nine-Nine and Parks and Recreation (both great in their own right), Schur hasn’t really ever created something akin to this before. Let’s be honest – the reason for this is business based; workplace sitcoms without much of an overarching story are perfect for syndication, while a show like The Good Place which ends each episode on a cliff hanger, really isn’t. I guess that it’s only because NBC has Superstore and is trying to revive Thursday night comedy that Schur was allowed to be so experimental with The Good Place (but that’s complete speculation on my part). The premise of The Good Place is immediately unusual; it revolves around a woman (Kirsten Bell) who has mistakenly been put in ‘the good place’ by a fumbling deity-like figure played by Ted Danson. Of course, this turns out not to be the case – the real premise is that a malignant deity (played by Ted Danson) has trapped four people inside their own personal hell, playing each of their personalities off of each other in order to create a place of eternal torture. I think to see how impressive The Good Place is, it’s important to examine how each premise works on its own. 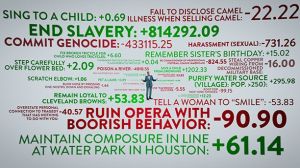 The initial premise is the one that carries the series right up until the second half of the final episode on an initial watch, and so remains probably the most important in the minds of most casual viewers. The entire structure of the good place is immediately sketchy, however, and I did see people theorise that it might actually be the bad place from episode one. It’s important to note, however that the show does a good job of deflecting that theory, mainly by ignoring it and assuring constantly that not only is this the good place, but it must be because there is also a bad place (run by the amazing and always hilarious Adam Scott). All the problems with the good place are repeatedly asserted to be all Eleanor’s fault, which is a neat deflection, and one that creates an amusing premise within the fake premise. Speaking of Eleanor, both premises revolve around the four central characters (and Michael but more on him in a bit). These four are Eleanor (Kirsten Bell), Chidi (William Jackson Harper), Tahani (Jameela Jamil) and Jason (Manny Jacinto). Nicely, most of these are played by relative newcomers, and all of them play their parts well, with the exception of Jacinto, whose line delivery sometimes came across a bit forced. I also started off the series with a dislike for Tahini, but this is something that changed circa. Episode 3 or 4. These four are supposed to be ‘perfectly matched to torture each other’, yet this choice of characters somehow manages to work in the first premise as well. There’s great friendly chemistry between Bell and Jackson Harper but you can also see why they ‘torture’ each other, even if Chidi being a Kantian ethics professor facing a moral dilemma is a little bit on the nose. Once again, Tahani being so self-centred raises questions about the moral implications of the good place, but this is further stuffed under the carpet because the good place itself is so flimsily built for heaven. While we’re on the topic, the ethics of the good place are brilliantly specifically designed for comedy – and I urge everyone to screenshot any time some of the rules are bought up – there are gems a plenty. In fact, the entirety of the good place is funny – its plastic-y aesthetic really makes it a certain type of heaven; the one chock full of frozen yoghurt stands, to be precise. The initial premise, then, disguises it’s twist quite well, and a lot of that has to do with pacing – the series carries the audience from cliff-hanger to cliff-hanger, joke to joke at lightning speed, and we aren’t given much time to catch our breath and wonder about the problems of the good place. 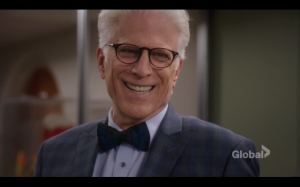 So yes, initially the show works well. But the show feels like it’s missing something right until the very end. Parts (like the giant insects) feel inconsistent with the rest of the show, and the whole thing feels like it should be a little funnier, that the characters should all be getting on more, and joshing about in the expanse of heaven. When I heard about a show about heaven from Mike Schur, I didn’t expect it to be quite as tense and quite as mopey for some of its characters. Of course, these fears are put to rest at the final moments, and during the subsequent re-watch. You see, the show isn’t aiming to be a traditional network sitcom, it has loftier ambitions. And these ambitions are revealed at the end of episode 13 by Michael.  And I’m not quite sure if I mean Michael Schur or Michael the architect. Clearly the name was intentional though, both are the ultimate creators of the universe the characters exist in, and both create the set-ups that lead to the torture of the protagonists. I’d like to give a special shout-out to Ted Danson, whose performance here is the performance of a career, simultaneously creepy and whimsical. And of course, there’s that smile. The final twist of the show manages to cleverly put everything into its rightful place in a way that I didn’t quite realise up until I’d seen the show again. It strikes a slightly false note that this elaborate set-up was made solely for four unremarkable people, but accepting that leads to an otherwise pretty perfect twist; guessable from the start, but something you’d never even consider. Of course, more is likely to be revealed in season two, so I’ll stop talking about it here, but it really is a feat of the kind I haven’t really seen in a sitcom like this.

I don’t think that The Good Place is a perfect show, mind. It could do with being a bit funnier, and some of the performances are a little off. I also have neglected areas of character development here, and focused mainly on the big picture (maybe I’ll go more in detail when it comes to season two), and that’s a shame, because the character stuff is where much of this show lives and dies. But I wanted to focus mainly on why this show is so special, so ambitious as to be worth talking about and worth remembering for years to come. Because it so is.

One Reply to “Review: The Good Place”