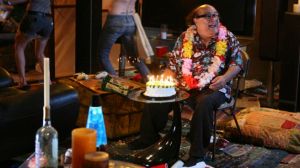 Well, it’s been a tough year for the world, but there has been some good in 2016 at least. Clearly the best thing though was the continuation of Toatali Reviews, which started one year ago today. There’s been a lot to write about, from long searching reviews of Ace Attorney games to shorter reviews of Pokemon games that I wish I hadn’t made myself do. As well as video games, I’ve made some brief forays into film criticism and made a guide to modern TV comedy , while also reviewing some comedy shows as stand alone pieces.

Yeah, it’s been an alright year blog wise, but I do have some plans going into our second year. I’d like to write more about comedy, with some longer reviews, covering both individual seasons of a show and whole shows. I think while Quick Reviews take less time and enable me to get a higher volume of posts, they are also less satisfying to read and write, so let me know whether you want more of those or not. In terms of upcoming reviews, I will be doing some for The Last Guardian and Pokemon Sun and Moon, as well as for The Good Place’s first season and People of Earth. That’s all I have planned for now, but of course, all suggestions are welcomed.

Just to finish, here are a few of my favourite posts from the last year, please do have a read, and here’s to a great 2nd year for Toatali Reviews!

ERASED vs The Whodunit